Elevator Interior Design has been awarded the Fan Pier Project, Parcels ‘A & B’. EID assisted the owner and developed custom cab interiors for the eighteen elevator cabs for both towers. EID worked closely with the Otis Elevator Company for the seamless install of the finishes.

Using textured and etched laminated, back painted glass in beautiful blue and green hues inspired by the waterfront, the cabs evoke views of the outside world. The ceiling system is island type finished using warm wood veneers with trim-less LED downlights and the perimeter LED indirect lights subtly illuminate the walls.

Fan Pier is the massive 23-acre site on Boston’s waterfront next to the $170 million federal courthouse (built in 1999) the World Trade Center/Seaport Hotel complex and the Institute of Contemporary Art, which relocated to the pier in December 2006. Parcels A & B are two of eight parcels currently in development. 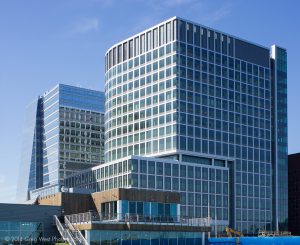